The UK and Irish onshore wind markets are beginning to return to a somewhat buoyant level of activity and although things have changed a lot since the days of the RoC and REFiT incentives, K2 Management is seeing stronger onshore activity every month.

Developers are increasingly looking at new greenfield sites and, as the finances of onshore wind energy become increasingly favourable, resurrecting developments that have been on hold for a few years.

This improvement in the financial viability of wind energy projects has many contributing factors - improved site design, improved construction methods and efficiency, and scale of project to name just a few. However, it should be acknowledged that the growth in size of turbines in recent years also plays a large part.

These newer, larger turbines can produce twice as much energy as their ROC-era brethren, so on paper everything looks rosy - lower LCoE and less turbines on each site, giving a less cluttered landscape.

So what’s the problem?

Whilst things are slowly changing, the acceptance of taller turbines through the planning process has often not kept pace with the increasing size offered by turbine manufacturers. As a result of not increasing the maximum allowable tip height, the lower tip swing height or tip nadir of the turbines (i.e. the height of the rotor tip above ground level at the bottom of its rotation) is pushed closer to the ground.

We are commonly seeing tip nadirs of less than 20m and even as low as 10m in some cases being proposed.

In the flat and open deserts of Chile or Egypt, such configurations may be plausible and perhaps even acceptable. However, in the often hilly and forested terrain of the UK and Ireland, some lower tip swings being proposed are actually below the height of nearby trees and terrain features and this poses many concerns.

Why is this a problem?

The long-term performance of turbines with large rotors and short tower configurations is not yet well understood. Close to the ground the wind flow is heavily affected by the shape of the terrain and any ground cover, such as trees and buildings.

These obstacles cause highly turbulent, or “messy” wind flow close to the ground, and high shear - a rapid increase in wind speed with height. With increasing height from the ground, the wind flow becomes cleaner.

We know that turbines do not operate optimally in messy wind flow – they are designed to operate in relatively clean flow with a moderate wind speed gradient across their rotor.

Such flow conditions are experienced on flat, open sites and at sensible hub heights and conditions. These optimal conditions are generally where power curve measurements are undertaken and on which the sales power curves for turbines are based.

In messy wind flow, a turbine is simply less able to capture as much energy from the wind. Not only this, but the loading on the turbine rotor and structure is increased significantly, leading to possible component failures. Messy wind flow has two main financial implications – directly through a reduction in energy yield and indirectly through increased OpEx and maintenance costs further down the line.

How can this problem be overcome?

Understanding how turbines perform in real world wind conditions sets a good foundation for making decisions on your wind project.

K2M uses actual power curve measurements from over 100 turbines in a variety of flow conditions in combination with site measurements, industry-leading CFD modelling and experience-based parametrised models to assess the wind flow through the entire rotor of every turbine on a site - not just at hub height, where conditions may be relatively benign.

This allows a thorough understanding of the wind conditions on a site, and the opportunity to identify and avoid areas of potentially messy wind flow through optimisation of turbine layouts or consideration of different rotor and tower configurations.

We also encourage engagement with turbine manufacturers at an early stage. Whilst they are obviously keen to sell turbines, they are also keen to see them perform well. In messy wind flow conditions autonomous loading control systems may be deployed in turbines as a form of protection, but such systems can cause shutdowns and therefore reduce energy yield, which has a further financial impact.

Avoid last minute surprises in the TSA, and have discussions at an early stage.

Large rotors on short tower configurations may look tempting on paper, but they come with risks attached. The more open your eyes and your analysis approach to these risks at an early stage, the more you’ll be able to avoid the long-term negative impacts on the project itself and improve the business case.

Why do we know so much about this? Because we've analysed hundreds of onshore wind projects in the UK and Ireland. See for yourself below! 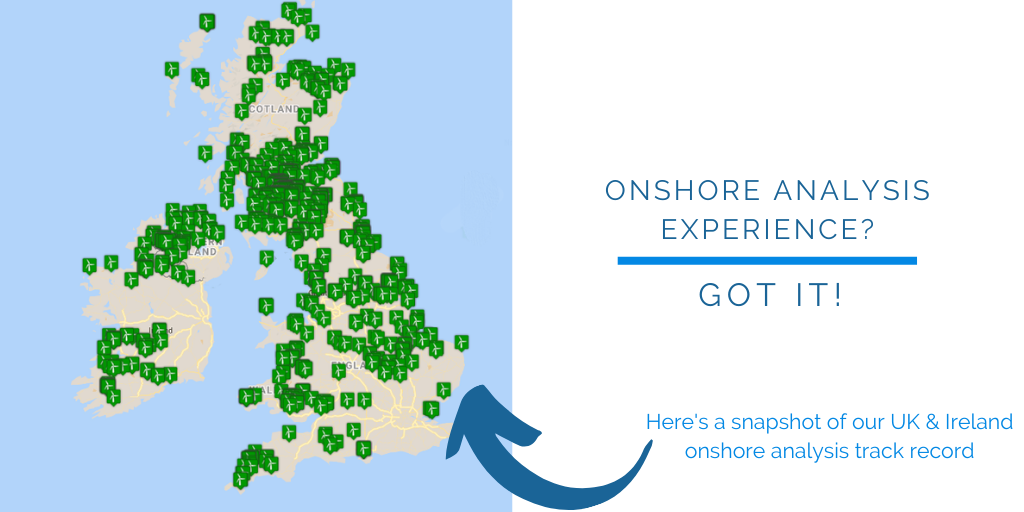